Police are searching for a suspect after a 13-year-old girl reported that a strange man tried to get her into his car in South Vancouver this week.

The teen was walking home from school near Kerr Street and Southeast Marine Drive at about 3:30 p.m. on Wednesday when she noticed a stranger following her in his car, according to Vancouver police. The man then allegedly stopped his car and told the girl to get in.

“A young girl was approached, she listened to her gut and knew something wasn’t right,” Const. Tania Visintin said in a news release.

“She was able to get to a place of safety before the situation escalated.”

The driver is described as a white man with a dark or tanned complexion, with short dark brown hair and dark brown stubble on his face. He appeared to be between 25 and 35 years old, measuring between five feet nine inches and six feet tall, with an athletic build.

Police say that at the time of the incident, he was wearing a black T-shirt and Ray-Ban style sunglasses. The suspect appeared to have clear plastic wrap over a tattoo on his neck.

He was driving a black, four-door, newer model sedan with a grey interior. Search for Kaden Young planned for Kitchener on Friday 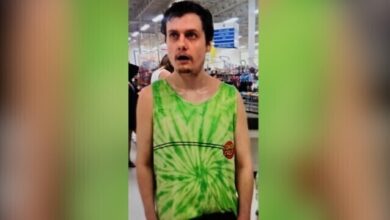